It’s that smooth groove music that sets the perfect ambiance.  Mood music is so important, especially when love is in the air; Saxual Healing is the music of love, it has the sound of love.

There are two versions of the story of how this CD came to be: my version, and Roberta’s (my wife) version. Her version is more interesting if you ask me, and you can read it below. Here’s my version:

"Late one night, back in early 2001 (Jan. 26, at 11:41 P.M. to be exact), Roberta and I were in the kitchen, candles lit, windows open to the cool breeze, drinking wine and eating blackberries. This was just a couple of weeks after we met.

We were talking about music, and I was telling her how easy it is for me to pick songs out of the air. To show off, I grabbed a little piece of paper and scratched down the little riff that was playing in my head.

There’s always a little riff playing in my head so it was easy. I wrote “Blackberries” across the top of the page, put it away, and we went on with our evening.  Here's that original chart: 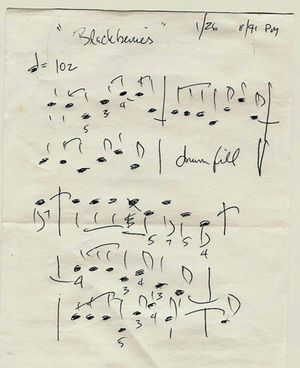 I never forgot about “Blackberries”, though, and a few years later I got that little piece of paper out and built a tune around that little riff: Blackberries. Its one of the tunes on this CD.

Over time this song has come to symbolize a particular energy that our relationship had when we first met, a romantic energy that we have worked hard at keeping in our hearts.

So this CD was originally going to be called Blackberries. But over time the whole saxual healing concept has gotten so strong that we eventually decided that Saxual Healing was a more authentic title for what we were doing. Also, I wrote a song called Saxual Healing that turned out sounding like a title track, so there you go: Saxual Healing.

But there is another layer to this project, a deeper layer, a layer having to do with my being a conduit for Roberta’s vision and energy. You see, for this project I agreed to act as an expressive instrument for Roberta’s self-healing. I recorded music that was what she wanted and needed to hear, and in the process, helped illicit and express her deepest emotions in a profound way. It was a very healing experience for both of us.

Since everything on this CD was designed to give her words an emotional musical sound, I sometimes really had to get out of the way. But I got what I needed out of it, too. I had a great time, and I love this music that came to be. I hope you do, too.

"The idea of Mark being a conduit for my emotional expression was not something that came easily to my ego. For years I had my own business and expressed myself creatively. I believed I was whole in being and spirit; I realize now it was simply an illusion, one created by my ego to keep me in constant doubt of myself.

Unfortunately, there was always this nagging feeling from within that left me unsettled. I worked diligently at running away from this dark feeling – I did not want to accept that it existed. Whatever this was, it certainly was something that I could not tackle on my own. In fact I was blind to how it looked. I needed a mirror, a reflection that would allow me to see myself. I needed relationships that would shed a little light in this hidden space.

You see, relationships are capable of exposing and healing those deeply hidden emotional wounds that prevent us from expressing our own unique potential. Until we see that reflection we operate on social beliefs or beliefs that were instilled through our parents or the generations before them. So it was with complete conscious awareness and intent that I set out to uncover the seed planted in me deep below the surface. With Mark and his saxophone by my side this journey became documented in song and story. It became a “Saxual Healing.”

Blackberries came about after an evening of passionate connection between Mark and I. The rhythmic tune popped into Mark’s consciousness as we shared a glass of wine over a plate of cheese, crackers and succulent fresh Blackberries. We were surrounded by the flickering candlelight, the smell of sweet, very sweet passion, and sensual music. In these situations you often find yourself feeding your partner with the utmost of sensual intent. Thus the Blackberries story begins:

“It was the first night he would spend at her place. After many days and weeks of talking on the phone she felt confident that this relationship was like no other. At least it ranked far ahead of all the failed ones. There was something different about this one. There was a particular energy that passed between them when their eyes locked for the briefest of time. It was apparent to both of them that the searching was over. Later they referred to this energy as the “frequency of knowing.” There was simply a knowingness about this relationship. There was an agreement, an unspoken knowing.

She was very cautious not to begin this relationship like all the others. There was a slow, methodical, and conscious approach to this one. After many weeks of phone conversations, occasional dates and afternoon movies, she was ready to invite him to her place. She lived along the ocean, he lived on the outskirts of the city – they were about 90 minutes apart. Some would consider this geographically undesirable. For them immediate access to the other was not the best thing; impulsive behaviors would have taken over.

This evening started in its own unique way with a walk along the beach, holding hands, and with warm loving conversation. Passion was building. There was definitely a Kundalini experience brewing. As the energy built there were undercurrents of past choices, habits and emotional wounds. As much as her heart was bursting with love and joy there was a deeper program being touched.

Their hours of passion seemed to pass quickly. They soon found themselves experiencing a slow seductive dance among the lit candles as romantic sax music played in the background. You see, he is a musician who plays the sax in a very seductive and sensual style. It is the energy that passes through him naturally. He is clear, he moves out of the way of himself. He knows he is a vehicle to express romance and sensuality, and this new relationship is helping him access and release it.

As in the beginning of all relationships they tried to impress each other with a variety of talents. You know, the things that promote acceptance and acknowledgment and definitely to keep them coming back for more; those slow seductive maneuvers, feeding them those sensual berries that are so so succulent and tasty.

The night was filled with endless passion and deep connection followed by intimate conversation. However, this conversation was understood through a musical expression, a little riff, a short sweet musical conversation that he jotted down on a piece of paper at 11:41 pm. This riff captured the essence of their evening. Slow, melodic, sensual and passionate, endlessly building and releasing the energy they created together. Peppered with moments of angst and confusion they always returned to the slow melodic rhythm and sensual nature of what they create. This became the essence of their relationship. It became their mission to create beautiful harmonious music that promotes healing. Whatever obstacles came their way they would always returned to the conversation of ‘Blackberries.’”

What Our Fans Say:

"Been listening to your CD, Saxual Healing. All I can say is ... AWESOME!!! Great arrangements, cool patches, cool grooves, perfect mix…masterful production! Your playing is magnificent, soulful, melodic, and has plenty of heart. Thanks for the treat!" ~Yves Vincent, San Diego, CA

"What a wonderful sound: beautiful sax tone, (sweet and smooth as hot butter) and his intonation and phrasing…as good as it gets. The songs on this CD Saxual Healing are all wonderful examples of smooth jazz mixed with soul, blues, R&B and yes, almost possessing emotional healing powers." ~Joe Edmonds, saxophonist, London, Ontario, Canada

"I just wanted to let you know how much we really liked the CD Saxual Healing. It reminded me a little of John Klemmer, one of my favorites." ~Victor Johansen, CFYE Productions LLC