This is one of my very first albums (it's actually my fourth, but that's another story for another time), and it's a collection of all original music played mainly by me.  It's got a very fun, lively, and free spirit and there's a reason for that which I'll tell you about in a moment.

This may sound weird, but I owe my music career, in some significant part, to envelopes.  Yes, envelopes.

You see, I've been musical all my life - it's always been very strong in me - and as I grew up and out I played in lots of great bands and had tons of great experiences.  But I never made much money at, mainly because I had no business sense.  I was living in LA at the time, and It got so bad - we were making something like $20 a night - I decided I had to get a, ahem, real job.

Through a series of unlikely incidents and subversive actions, I ended up getting a job as a sale rep for an envelope factory, suit and tie, expense account, the whole thing.  The cool part about it was that I made some decent jack.  I was no longer totally all the time desperate for cash.  And I learned some fundamentals about business that really opened my eyes about being a professional musician.

So eventually I tried again to make a living in music.  I bought some recording gear and some beautiful new saxophones and I made some recordings of some songs that I had been toying around with.  Kokopeli is part of that initial discovery of the joys of discovering professional musicianhood.

I was hanging around quite a bit with my boyhood friend, the dearly departed Paul Reeder, over in Tucson where he lived and so absorbed a healthy dose of both desert and hippy culture (Paul was an astrologer and a complete hippy).  Here's my buddy, Paul Marshall Reeder: 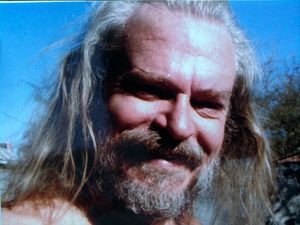 Paul was a great guy, a dear friend, and very talented musician and saxophonist.  He was instrumental in the genesis of this album, and he plays some sax with me on a few songs.

I dedicate this album to you, old friend.  I miss you!

Anyway, in this period of my life I was learning that I can compose music while simulaneously  learning how to be a better musicbusinessman.  Part of the result of that was this album, Kokopeli.  It's a lot of fun and is an expression of my experiences with a bunch of Arizona hippies, whom I still love very much.  We first sold my CDs (and cassettes back then) at the street fair in Tucson, and that really opened our eyes to how we could market music.

People still tell me how much they love this album.  I hope you do, too.

What Our Fans Say...

Your "Coltrane Reeder" is among my very favorite songs.......ever! I bought Kokopeli two or three years ago in Savannah, GA (my home). I honestly never listened to it until I started playing my old Dolnet Tenor again a few months ago. Its rare to hear a player go for the bottom end like you do. Perfect! You have the tone and embouchure that is exactly my style. I only wish I had your talent. I have turned all my friends on to you.....You have a pretty good following here. I wish you the best of luck. ~Jimmy "Scoop" Olson, Savannah, GA

I first heard your music back in the mid 90's. I was in LA to visit a sick friend and took some time to go to a festival. I heard this beautiful sax playing in the distance. I followed the sound, chatted with you, and purchased your CD Desert Dreams. That day was a nice break from an otherwise sad trip. After many years I dug that CD out the other day and played it. I had forgotten how fun and breezy it is! It also brought back some pleasant memories for me and made me think of my friend who has since passed away. Just wanted to thank you for the great music and the pleasant memories! I'll be playing DD for a while! And now I'll pull out Kokopeli and play that too! Take care! ~Brian T.

Mark, I went online to order another CD. Kokopeli is my favorite. It also appears to be the favorite of the girls I date. This will be my 4th copy I am going to buy. Also my last. I'm not letting the girls have it any more. Sorry for your sales but I will give them your address so you can sale them their own copy. Thanks for the great music over the years. ~Dino